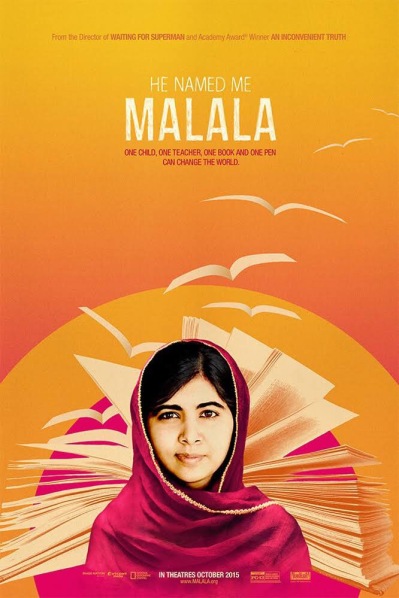 Malala Yusufzai; living in the North of Pakistan where Taliban is powerful, she has been shot from the head by a Talibani terrorist because of her activism for girls rights to have education, survived from the shot and has received Nobel Peace Prize at the age of 17…

[Prenote: All the civil wars, terrorist organisations, cities and heroes are fictional. The world’s never been a bad place. Believe me…]

My father had died when I was little. My father’s father, my grandpa didn’t let my mom and me go, because I have a little brother. But she forced my mom to marry my father’s brother, my uncle.  In my country this is a tradition. Brides whose husbands die at war or something have to marry their brother-in-laws! My mom resisted. She has been beaten up and raped by his father-in-law and brother-in-law. They say  “You are a widow, you should like this”. So bad. My mom has been like anorexic because of crying all the time and never eating and drinking anything. She could pass from the tiny doorways, sleep between the matress and the duvet like a sheet. When she has no body to be touched, they left her alone. She has become a shadow.  I was to become a shadow and vanish next but thank God I was able to adapt myself to live as a shadow.

My name is Gölge, it means “shadow”. I take my power from being weak, vanishable and invisible. I have no family. I am powerful now but I couldn’t save my mom from being faded away. I have a brother. He never wants to be shadowed by anything, never by me…

His name is Güneş, it means “sun”. He constantly shines and continually burns.

He has  joined PISIS, to set a fire on the most  fighted region of the world. He used to deal with filthy jobs. If you ask that “What is PISIS” I may answer to you as “PISIS is a terrorist group” or “A group of furious Sunni young people… Whatever. I have always watched his back at high-school, he’s all grown up but I have to watch his back again!

I am in Casablanca. We are 80.000 people in the frontyard of the world’s second biggest mosque; the Hasan II Mosque, on the coast of Atlantic. Hodja is reciting the azan:

My cell-phone rings. Cencored number. Not a good sign. I pick up the phone. My brother tells me with great enthusiasm that he is so close to a PISIS camp at Mıdlib in Myria. There, he says, are 100 women captured by PISIS, to be abused and whom not obeys to the militans_

He says he will send an encrypted  e-mail to an account that only two of us know, and he hangs up the phone.

Encryption=Lisbeth Salander. Lisbeth= Encryption. She is my hacker friend. But she is in Sweden, I am in Morocco. I need Batman’s Batmobile to go to Mıdlib. But Batmobile is too fantastic to go to a region of a civil war. This is real life. I am all alone.

I have to use my vanishing ability to assign a road map. I depart from Casablanca to Tel Aviv with a three hours flight. Then to the North, to Beirut, then Lattaika and at last I arrive at Mıdlib. Military cargo planes are perfect for me to travel secretly. It’s not only free, but also there are no boring flight crew.

Before I check in the only half-ruined building that carries a hotel sign in front of it, I have to seep inside and control the situation.

Whom I see inside is Mona Melthawy! She was born and raised in Egypt till she is seven then her family and her went to Britain then. She was fifteen when they have settled in Saudi Arabia, and at that early age she found herself as a women rights and freedom activist. She has written a book named “Headscarves and Hymens: Why the Middle East Needs a Sexual Revolution?” If this book were translated to Turkish with the very same meaning, it would have cencored like the Playboy magazine as well. Because in our country, they think about a headscarve and a hymen that, if one is not proper the other will not appear, vice versa. So they can never be used in the same sentence. (But they can be used to sentence a woman.)

As I hear Mona speak, she talks about captured 100 women! PISIS! The North area of Mıdlib? So what?

I am persuing her. Now I am Mona’s Gölge.

Look what I see! Here comes a Turkish journalist Erk Macarer! He is not having a vacation for sure. With a little careful listening, I see he’s got the same information as Mona an me and he is seeking a big news.

At night I send two notes under the doors of Mona and Erk and we unite in my room as a great coalition power!

All three of us are puzzled. I cannot betray my brother and they cannot inform on their informers. But gathered intelligence is all the same. We, however, have to enter the PISIS camp, and release the captured women. And we have take them out of the camp silently. 100 women? As fast as we can? With what? To how far? Have somebody got a B plan?

It’s dark outside. I’m dark outside. PISIS camp is silent except few gunshots are heard from far away. Mona and Erk have  entered to the shed that the women were captured in. It’s number one gain of wearing a “haik” as a man: You can hide yourself everywhere! But don’t try this at home.

I, Gölge, being a shadow, will seep into the ammunition shelter. I have to make some explosives dormant. But I have to find my brother first. At least we’ll have an armed comrade with us!

If it’s all dark, it doesn’t matter if you’re dark or not. I got caught just as I was meeting my brother. Because of family ties, 100 women, Mona, Erk, Gölge and Güneş are being  prisoned in a shed!

We are surrounded by PISIS militans whose faces are covered with black masks and whom have machineguns. My brother will be executed for betrayal, God knows what will happen to us!

I was dreaming. We were 80.000 people in the frontyard of the world’s second biggest mosque; the Hasan II Mosque, on the coast of  Atlantic. Now we are 104  hostages of the world’s second terrorist (sorry furious) group. Our head’s will be chopped off either we are in a mosque or a shed. The hands that rise in the name of Allah will fall down with blood. Noone will be able to defy.

Gunshots. Automatic. Just like in the movies. Get dooooooooooooooown!

The door banged. Whom? Ivan Drago? And his men? “He is my super hero!” says Mona. He is the Russian giant whom killed Apollo Creed with one beat but has beaten by Rocky. Beter came Rasputin! Or whatever! He has muscles. And an automatic weapon. There has been no alive PISIS militan in or around the shed. They say “Don’t be so arrogant PISIS, there is Russia more powerful than you!” Is Russia our friend or enemy? They were bombing everywhere like “bayır bucak”? Hey it’s not time for questions. Hold on now. There is no ugly terrorists, just not enough votka. Or not enough oil?

Then comes a thing that makes the helicopter almost upside down with the airflow that it created. An aircraft. A more powerful searchlight. And a more powerful voice:

“Surrender and leave the hostages! Or the camp will be destroyed!”

Everbody says a “Bismillah”. Even if Ivan. We are innocent villagers whom saw an UFO. Close encounters of the third kind. Who is this third kind?

BATMAN! And Lisbeth Salander? H-h-h-h-h-ow on earth? The aircraft is as big as an aeroplane but it lands as a helicopter. Batman, have you got a driving license for this?

“You think you can receive an encrypted mail and I will not be alerted?” says Lisbeth. Thank God she’s smart. Actually a hacker. I bet she is. As for Batman he’s a little bit prig. He said he was trying his new aircraft. Since he had arrested all the bad men in Gotham, he’s been searching for excitement. I said you can never be bored here. Welcome to the Middle East!

Batman’s desire for fun(!) happened to make us free from PISIS’s dirty hands: 100 women, Mona Erk, me, my brother, Ivan and his men.

They have nowhere to go. The civilized countries(!) in Europe are not allowing the refugees to pass their borders because they won’t be able to control their pregnancies, their births, their education. If they allow them, they will be downgraded their education levels. Countries like Turkey are getting crowded and crowded like an Indian public transport vehicle at rush hour. Neither a proper solution, nor an education, health and work policies are planned for the refugees.

Batman says that he can take the half of the women to Gotham. A big fire happened to burn down the laundry department of Gotham Hospital and many of the female workers were dead. Women are slain… He says these women can be recruited in the laundry deprtment and may have proper jobs and homes.

We took the rest of the women to Pakistan with Mona. There, they will meet a very young lady. Women are Malala…

“We need lots of volunteers” she says. “We are educating children which have never be able to go to school before. The little ones need nursing. There are many orphans because of the civil wars.”

Before she gets off the air plane, Mona asks to Erk Macarer that:

“In your country many journalists are arrested and sentenced because of their articles, how will you be able to write all of these?

“In Turkey there’s a saying that ‘The fear of death doesn’t make you immortal’. So we shall not be afraid of someone who is afraid of his own shadow. And we have to keep tracing the truth like a shadow, like Gölge. We won’t give up…”

Me, Lisbeth and my brother Güneş… As I was saying to my brother “I won’t ever leave you alone!” Batman joins the conversation:

“It’s not for you to handle this young man, Gölge. But when I saw him handling his weapon, I thought he might join the GCPD (Gotham City Police Deprtment) as well. And I am seeking for an apprentice. One who served the terrorists once is the best one to fight against them, isn’t it? But we have to find and Anglosaxon name for you that audience can pronounce. Likeeeeeeeeeeeeee?

Lisbeth’s saying “Tell Alfred my sincere respect” was the last words that I have heard in the aircraft. I find myself sky-diving above the endless Atlantic ocean. Lisbeth sails just after me.

We pull the ripcords. As we land into the frontyard of the Hasan II Mosque, the muslims began to prostrate in the name of Rahman-and-Rahim-merciful-and-compassionate- Allah, following the azan for the Dhuhr prayer: